GEM grandly held the 2022 Annual Work Summary and Innovation Quality Meeting on December 31, 2022. Hu Yabo, Secretary of the CPC Committee of Jingmen City, Professor Xu Kaihua, Founder and Board Chairman of GEM, Ms. Wang Min, Cofounder of GEM and Director of the Board, and other important guests attended the meeting.

To accurately focus on cultivating and introducing a batch of high-end innovative talents with international vision leading the industrial development and making breakthroughs in future technology, GEM issued its “Top Talents” program, selected two top talents of the year for the first time and awarded each of them a BMW X5 approximately worth RMB 800,000 at the meeting. In addition, the meeting commended twelve 2022 annual leading talents and successful innovators and awarded each of them a Voyah FREE approximately worth RMB 400,000.

The top talents that GEM recruit all over the world are considered as internal talents or external experts of “top talents”. GEM will grant each of them no less than RMB 3 million every year as their special research and development funds. Meanwhile, GEM will appoint “top talents” as team leaders, and let them independently organize their teams, build their independent labs, independently select their research topics, independently examine and approve their projects and independently manage their work and teams. In one word, GEM will offer “top talents” a loose and free scientific research environment to stimulate their bellwether effects.

Professor Xu Kaihua, Board Chairman of GEM, published an exciting annual work summary and delivered a New Year’s speech at the meeting. Chairman Xu Kaihua first extended his heartfelt gratitude and paid high tribute to friends from all walks of life and the upstream and downstream of the global industrial chain! Then Chairman Xu Kaihua summarized the highlights of the historical brilliant achievements that GEM made in 2022.

In this year, GEM greatly released its production capacity, and its operating performance bucked the trend and improved. The operating performance of GEM bucked the trend and reached a historically high level in 2022. GEM fulfilled its annual target on time and entered the new development stage of “great production capacity release and rapid performance improvement”. Among the above-mentioned progresses, the increase of the new energy business was most outstanding, which comprehensively consolidated GEM’s core position in the global industry. The urban mining was optimized and upgraded, and the power battery recycling became a new growth pole.

In this year, GEM’s capital went overseas and its green industry was globally approved. The global depository receipts (GDR) of GEM were successfully issued and listed at SIX Swiss Exchange in 2022, which indicated that the China-Switzerland Stock Connect was officially launched by listing Chinese green low carbon companies and enabled Chinese green enterprises to provide Chinese solutions for European green development. GEM successfully gained a USD 200 million sustainable development loan from a green bank consortium in the Hong Kong market and the loan was the first loan that the Chinese new energy vehicle industry chain gained for sustainable development from a green bank consortium, which showed that the green industry idea and ESG value of GEM had been comprehensively and highly approved by the international interbank market and a great credibility channel of the GEM green industry had been established in the international interbank market.

In this year, GEM achieved new development in the international market and solidified its cooperation with the global industrial chain. GEM accurately anticipated the change in the competition pattern of the global industry and decisively took measures aiming at the long-term targets in 2022. It secured the million-ton-level ternary precursor orders, established stable partnerships with its core clients and solidified its core position in the global ternary precursor field. It joined hands with South Korean enterprises and they jointly built the “Indonesian nickel resources — South Korean material manufacturing — South Korean market — American market” channel. GEM, Tsingshan Industrial and Weiming Environment jointly formed a strategic cooperation alliance, jointly dealt with the market challenge and successfully consolidated GEM’s core position in the global market and supply chain.

In this year, GEM standardized its governance, enhanced its value and upgraded its brand. GEM strictly observe all the governance rules of domestic and overseas exchanges and promoted the international application of standardized governance after GEM was listed at SIX Swiss Exchange. GEM’s information disclosure had been rated Grade A for 9 consecutive years by Shenzhen Stock Exchange since 2013 and the disclosed information quality was highly approved by the capital market. In 2022, GEM held its 2021 annual performance explanation session in a video mode for the first time and over 100,000 people participated in the session online, including many eminent guests and distinguished friends; the stock of GEM was selected as a constituent stock of the Corporate Sustainability Index Series of Hang Seng A-shares for the third time; GEM was awarded some prizes such as “Enterprise with Outstanding Green Low Carbon Contribution” and “Prominent Innovation-driven Development Leader Prize”.

In this year, GEM carried out its cultural integration and its ESG value attracted the attention of the whole world. The company was reported on the front page of People’s Daily for two times, on CCTV-1 and CCTV-2 for four times and in the special financial and economic coverage of the Xinhua News Agency for two times in the year. On October 1, 2022, the full-length documentary Journey of the Central Radio and Television Station was screened on the CCTV-1 channel at the peak viewing time and the active contributions that GEM made to the green development of China in the past ten years were shown for more than 30 minutes.

In 2022, GEM adopted an open-door policy in its factory management and helped poor households get rid of poverty. It held over 20 open day activities and received 12,204 visitor-times in the whole year. Wuhan Industrial Park of GEM was selected as “a practical teaching base of the comprehensive politics, ideology and morality class” to spread green culture in the society. In 2022, GEM accumulatively spent RMB over 70 million in helping poor households get rid of poverty; it participated in the one-enterprise-helping-one-village program and helped students from poor families enter universities to repay the society; it donated RMB over 15 million and set up the Indonesia-Central South University-GEM Joint Engineering Master Class; it donated RMB 30 million to Central South University to promote the development of the metallurgy education cause; it financially helped 134 students from the needy workers’ families and other poor families enter universities. GEM and Indonesia jointly cultivated two batches of metallurgical engineering masters (i.e., 53 metallurgical engineering masters) for Indonesia in 2022, which promoted the in-depth cultural integration of China and Indonesia, highlighted the Belt and Road Initiative, continued to expand the global promotion of the ESG value and demonstrated the responsibility sense of the leading Chinese ESG enterprise!

Wuhan Industrial Park of GEM passed the carbon neutrality zero carbon factory certification of SGS in 2022, which indicated that GEM had made important progress in its dual-carbon strategy.

Chairman Xu Kaihua pointed out that GEM still made abundant achievements though the global economic situation was poor, the market demand shrinked, the world was challenged by the COVID-19 pandemic and the Russia-Ukraine conflict broke out in 2022. The following three reasons had led to the good performance: First, GEM could achieve the high-speed new energy development with the help of the dual carbon promotion campaign because GEM had adhered to the industrial base driven by “new energy material manufacturing + urban mining” for 10 years. Second, GEM still made abundant achievements due to the technical basis and core competitiveness of GEM that formed because GEM had adhered to the idea of “taking innovation as the guide and giving priority to quality” for 10 years. Third, GEM still achieved good performance because of the indomitable struggle of GEM’s excellent employees.

Chairman Xu Kaihua pointed out that now we were at the crossroad of the changing global situation and the industry shuffle and various challenges of uncertainty would appear at the same time, which would cause 2023 to be the most difficult and most unpredictable year compared with the past ten years and make us work more difficultly in 2023 than we did in 2021 and 2022 and accept unprecedented challenges in 2023. Perhaps the global enterprises were now at a critical moment to “overcome various difficulties and take strategic highlands” facing a situation full of difficulties even dangers. As a globalized enterprise and a leading enterprise of the global new energy industry chain, GEM could not improve itself without being affected by the global situation. It must actively accept challenges, overcome difficulties, “seize” opportunities, “dare” to take risks, “struggle” to find a development road, remodel its fighting spirit, undertaking spirit and devotion spirit, stabilize the following six aspects: “the fighting atmosphere, the development environment, the capital chain, the industrial chain, the sales volume and the profitability”, take “leading the innovation, reducing the costs, improving the quality, enhancing the efficiency and making rapid progress towards the goal” as its working motto, use the idea of “taking innovation as the guide and giving priority to quality” as the leading idea, take the comprehensive digital upgrade promotion as the basis, the Indonesian nickel resource raw material system as the base plate and the cost reduction, quality improvement and efficiency enhancement as the key work, comprehensively implement the “3+2” project of the new energy material business and the “3+1” project of the urban mining business, comprehensively enter the new development stage of “great production capacity release and rapid performance improvement”, participate in the intense competition of the global industry with the help of the absolute advantages of “leading innovation and prioritized quality”, do well and bravely in the global industry competition, achieve good performance to pay back the shareholders and let green development brighten the world! 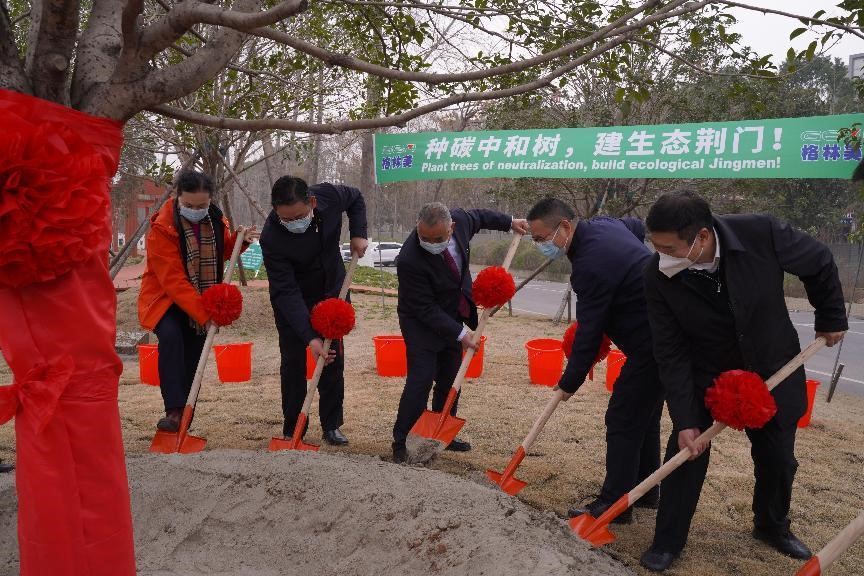 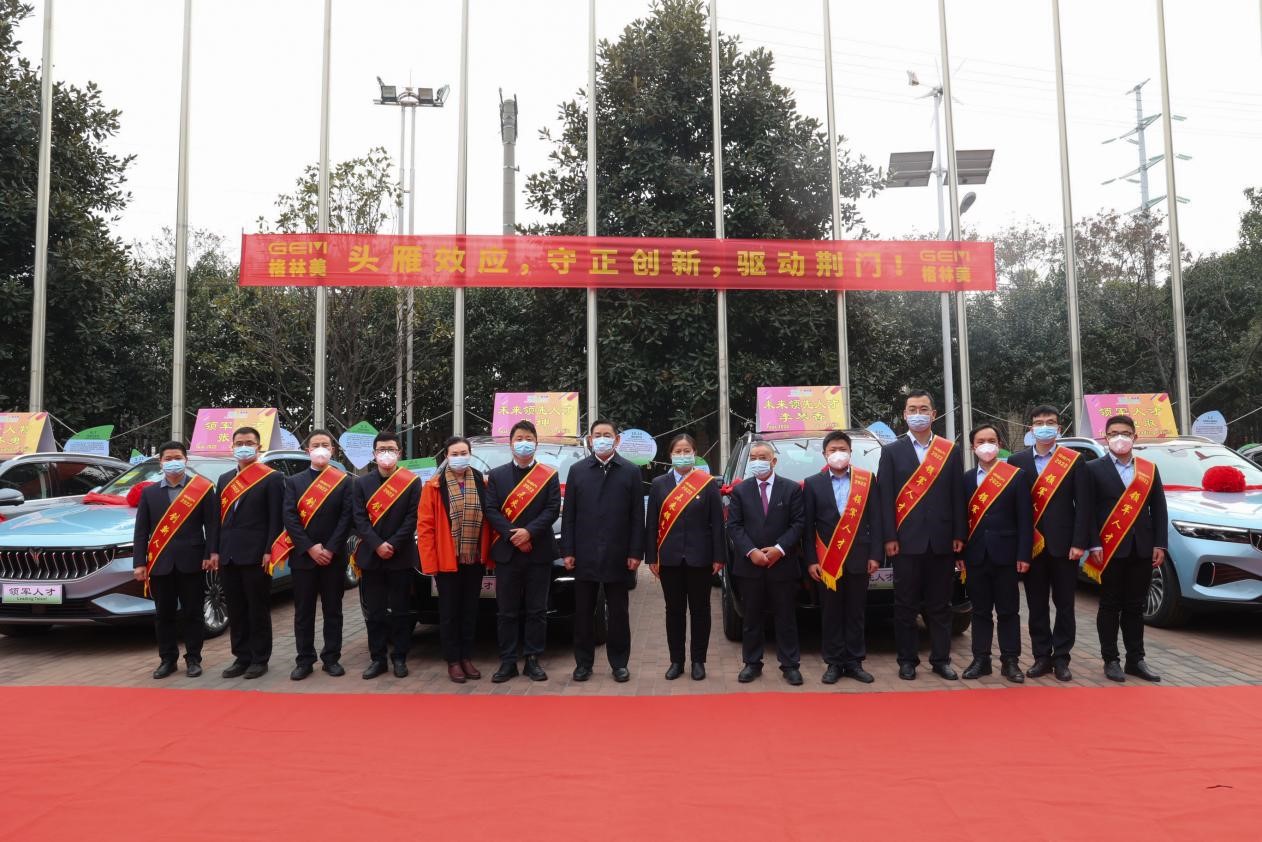 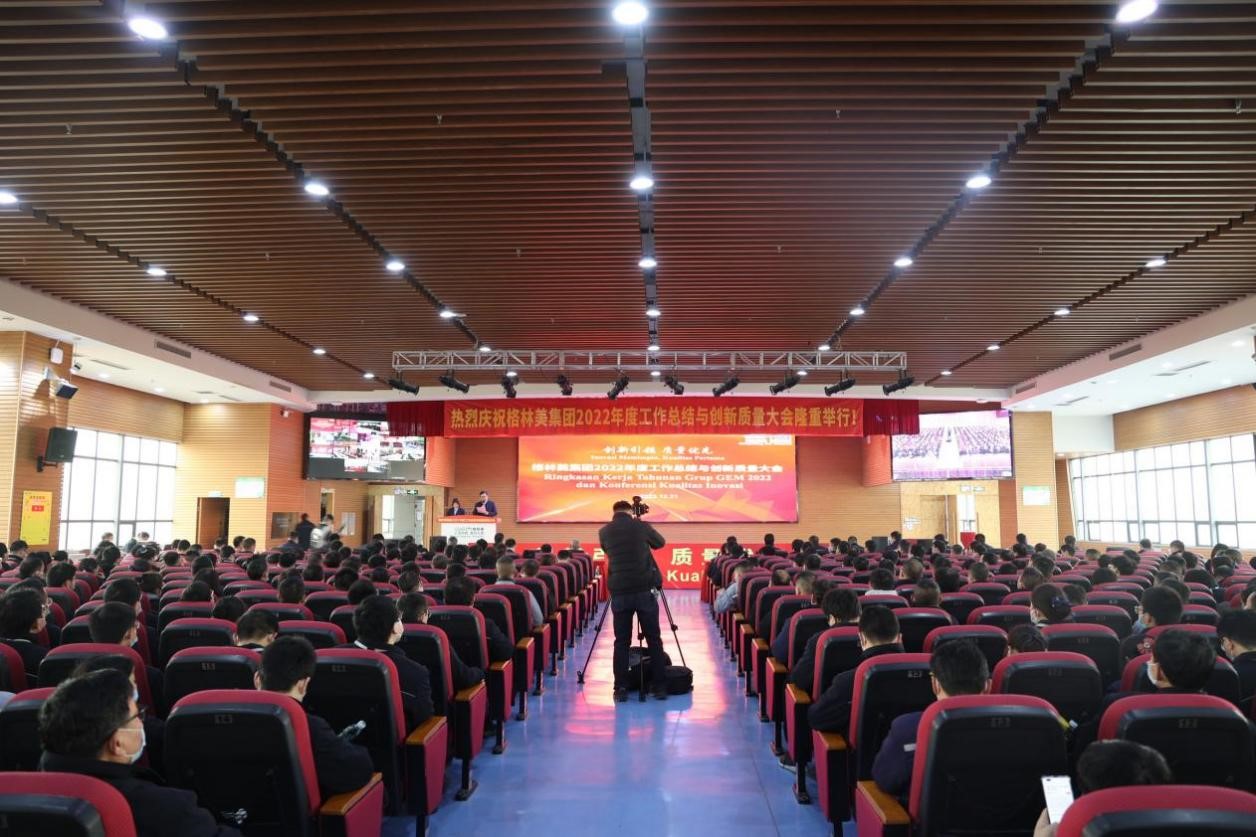 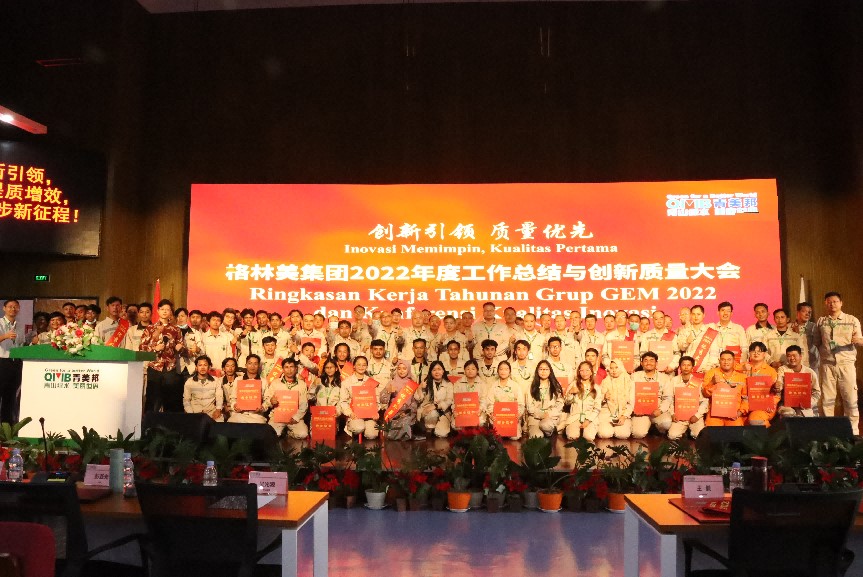 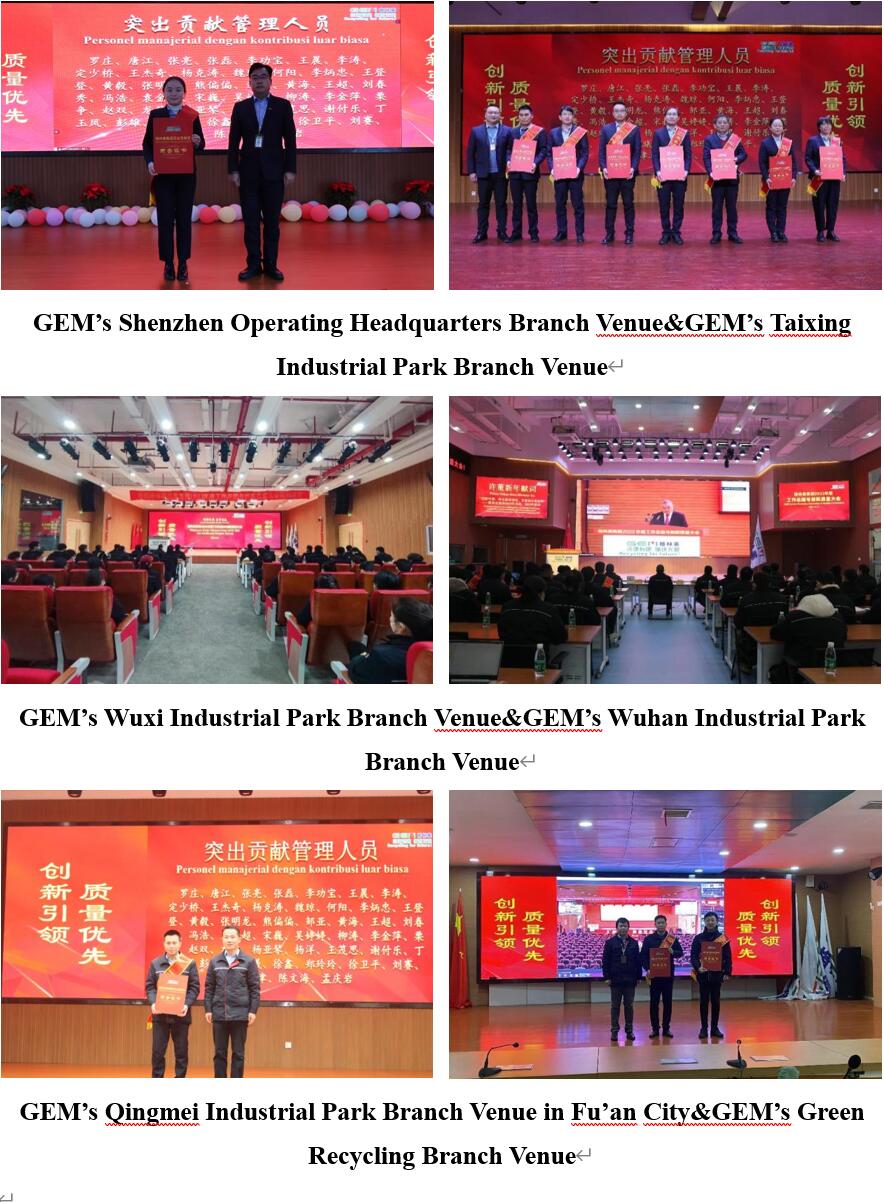 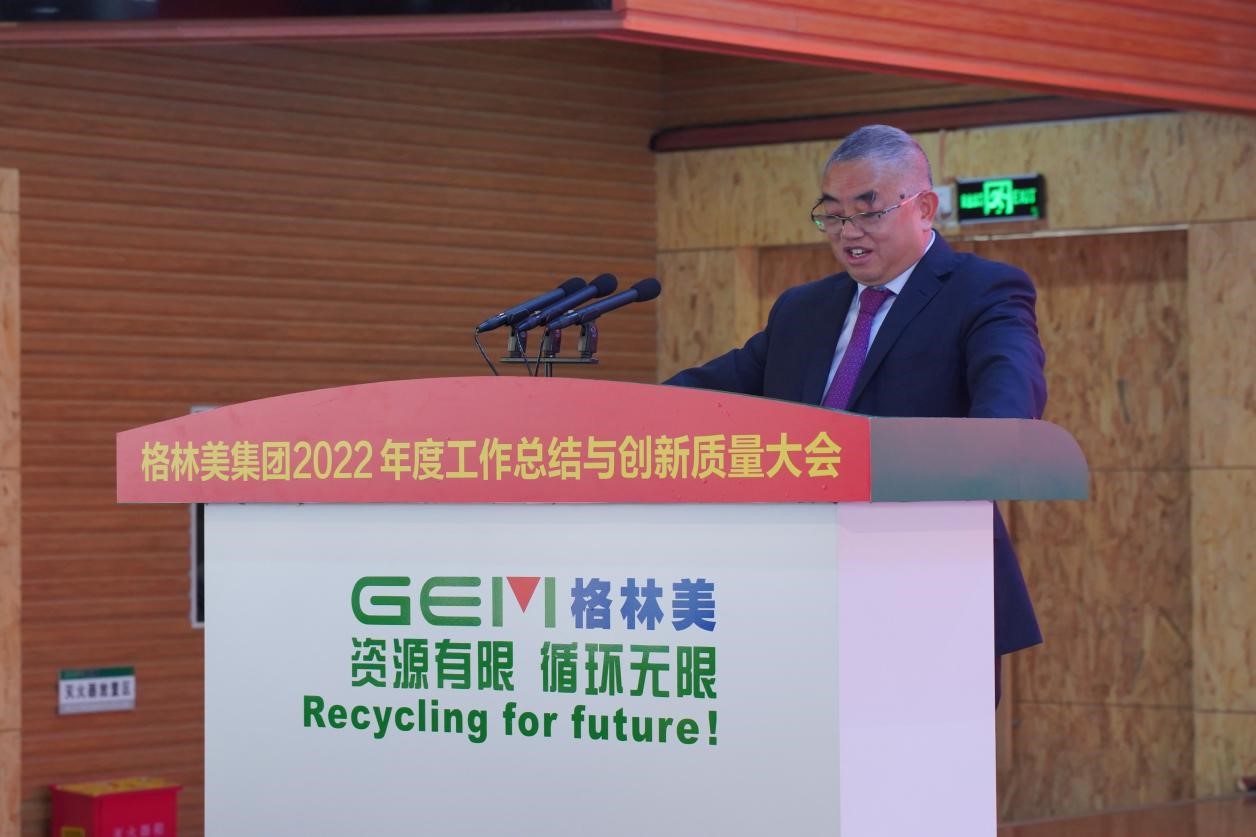 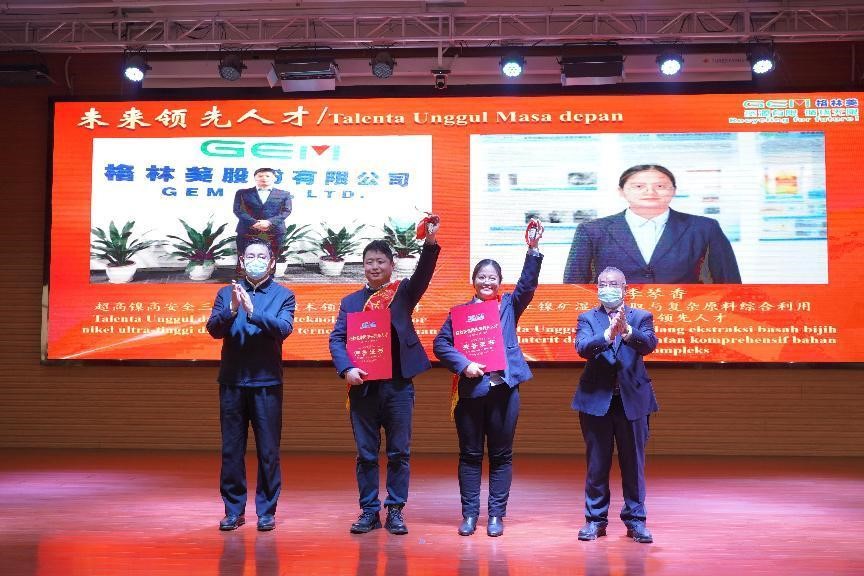 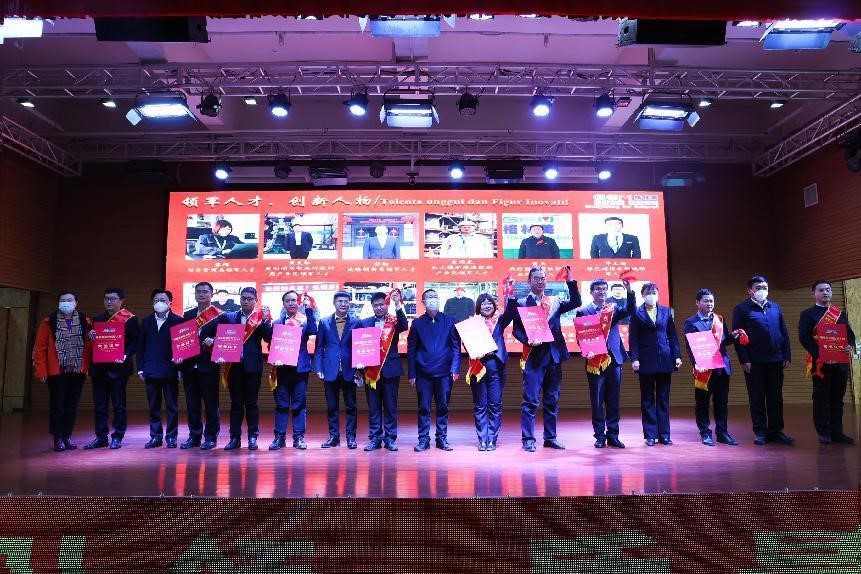 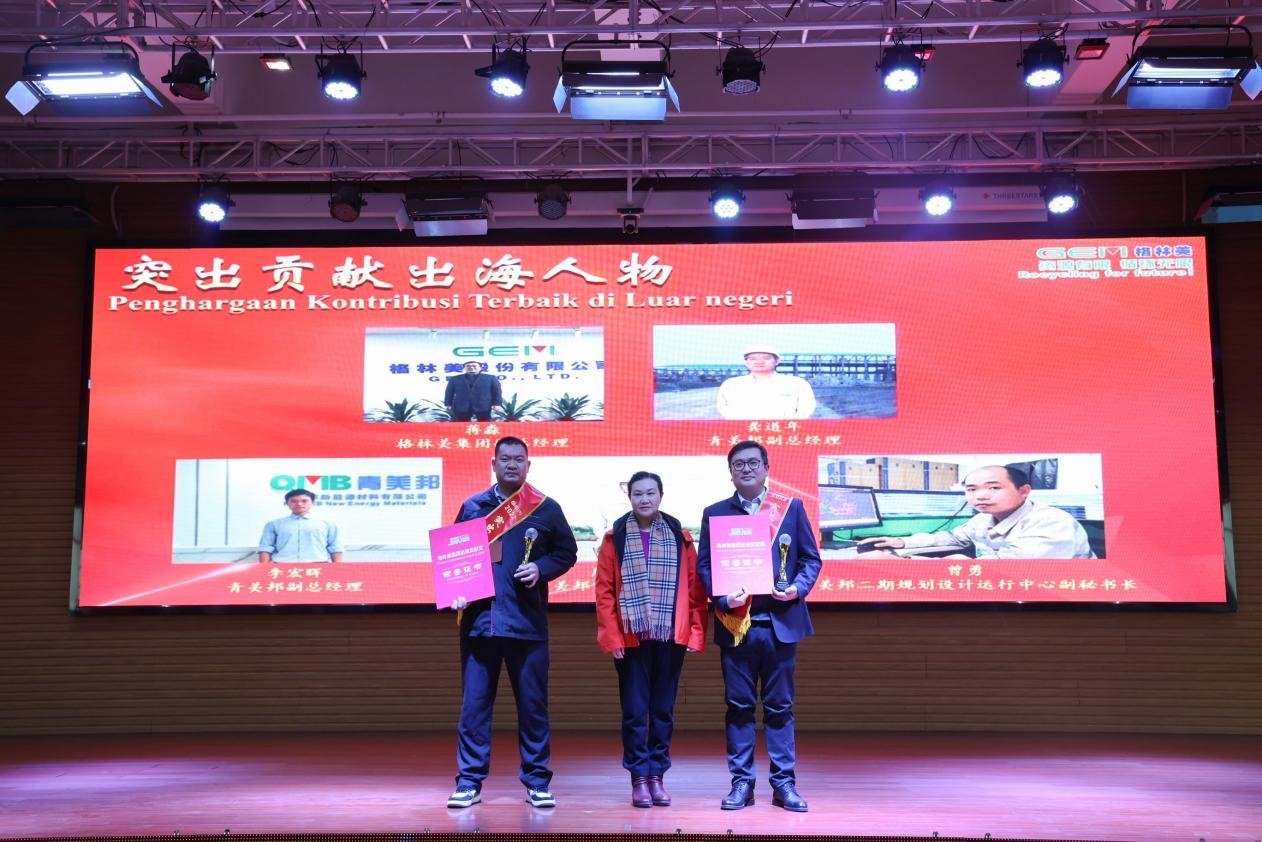 Fig. 9 The award ceremony for overseas figures with outstanding contributions 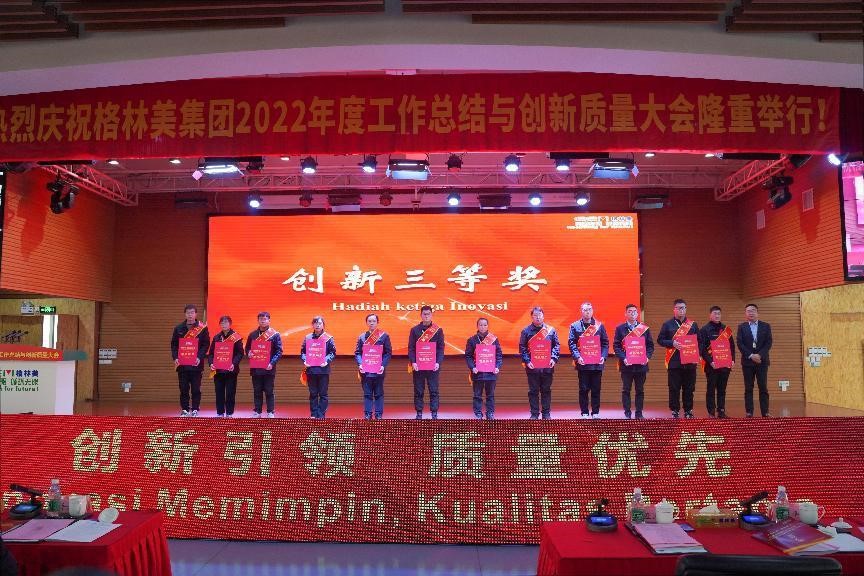 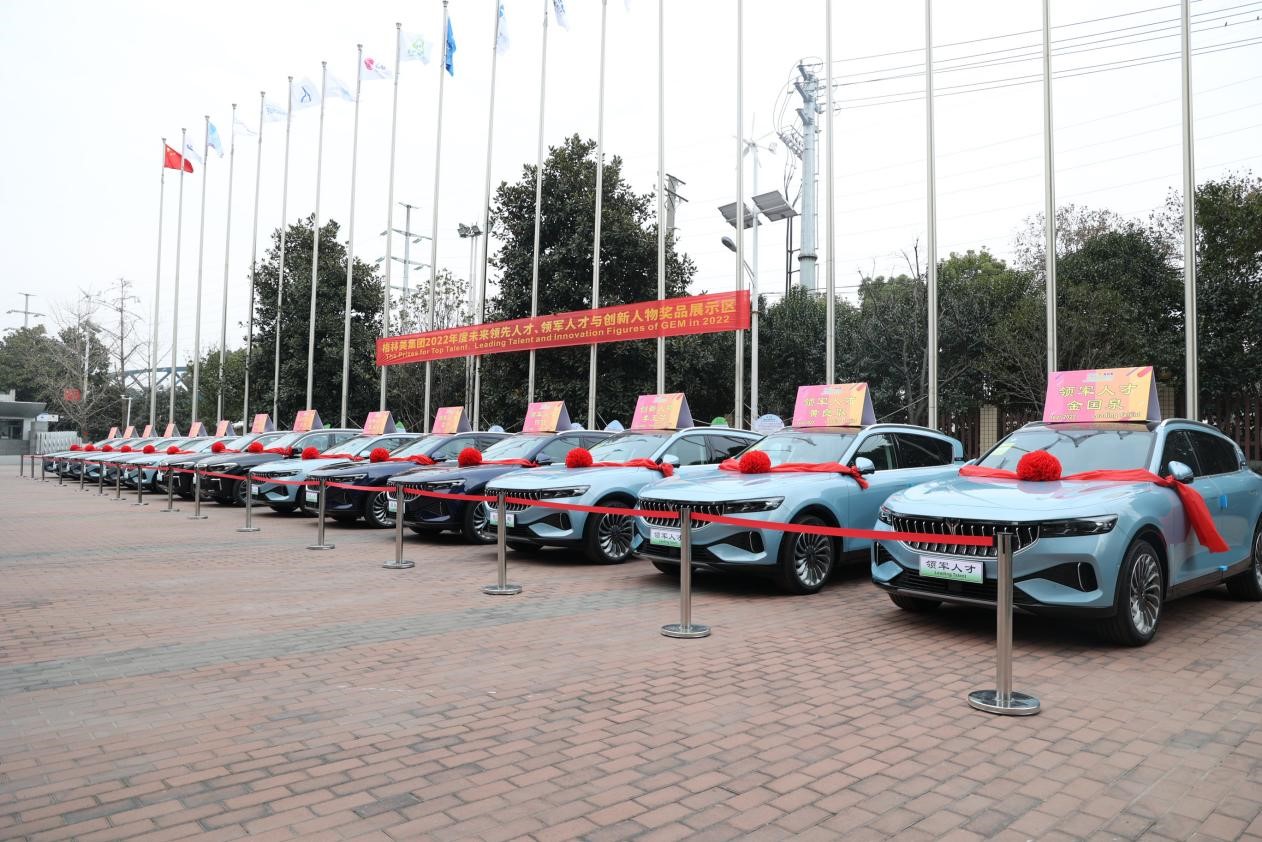