Recently, WUHAN POWER BATTERY RECYCLING TECHNOLOGY CO., LTD. (WUHAN POWER RECYCLING), a zero carbon demonstration park built by GEM, has passed the carbon neutrality certification of SGS. The company's greenhouse gas emissions in 2021 were verified in accordance with ISO14064-3: 2019 (specification with the guidance for the verification and validation of green gas statements) and PAS 2060: 2014 (specification for the demonstration of carbon neutrality). According to the verification results, through the construction and operation of a pilot near zero emission park, the company has created low carbon demonstration scenarios to greatly reduce greenhouse gas emissions and achieve carbon neutrality in the park. 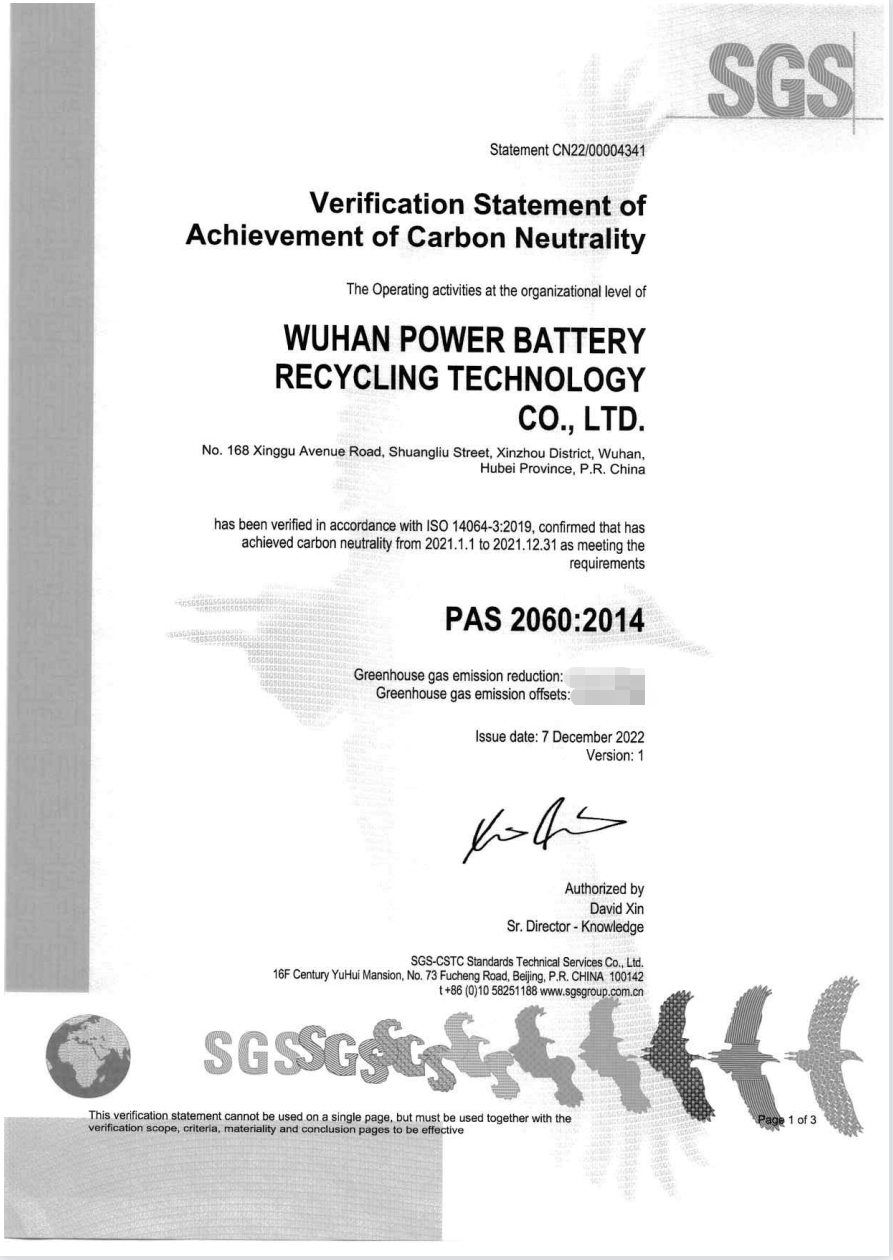 As an innovative attempt of GEM to achieve carbon neutrality, passing the carbon neutrality certification of SGS means that GEM's idea of green and low-carbon development has been internationally recognized, and shows its sense of positively coping with climate change, performing its social responsibility, and helping achieve carbon peaking and neutrality. With building a provincial zero carbon emission demonstration project as an opportunity, under its plan to create a zero carbon park, WUHAN POWER RECYCLING will constantly advance the creation of a zero carbon park, lead Wuhan and the country in the development of zero carbon industrial parks, set an example for the low-carbon development of GEM, and contribute the power of GEM to carbon peaking and neutrality. 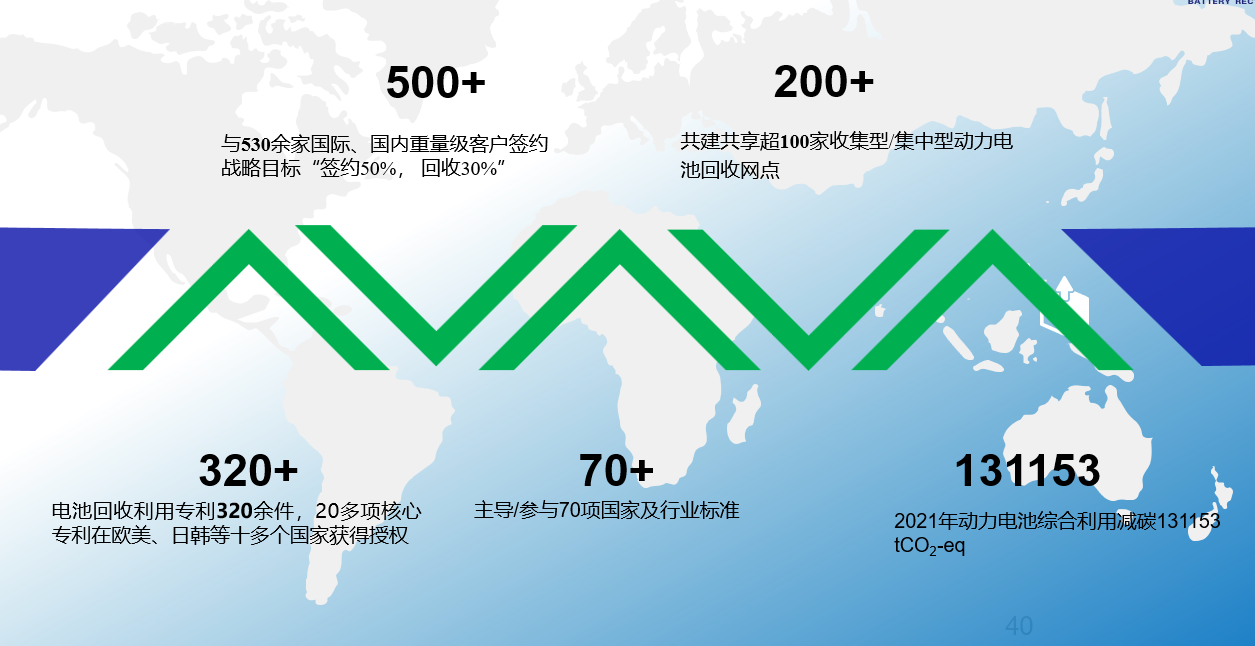 GEM has actively implemented the ESG strategy, practicing the ideas of green design, green technology, green process, green production, green management and green supply chain throughout the product lifecycle management. The company has a total of six parks in Tianjin, Taixing, Jingmen, Wuhan, Wuxi and Jiangxi named "green plants" by the Ministry of Industry and Information Technology. WUHAN POWER RECYCLING has been upgraded to a zero carbon demonstration park, played a model role in carbon peaking and carbon neutrality, achieved a green value transition from "waste to treasure" and "waste to carbon sink", realized decarbonization, and created a sample of carbon neutrality for the industry. GEM has won a series of honors for its strategic support to green and low-carbon development, including "China's Top 100 Listed Companies by ESG" from Securities Times, "China ESG Golden Awards 2022", the 12th Philanthropy Festival - "ESG Practice Model of the Year" and "2022 Wuhan Outstanding Enterprises in CSR Performance", gaining wide recognition from home and abroad for its green and low-carbon development. 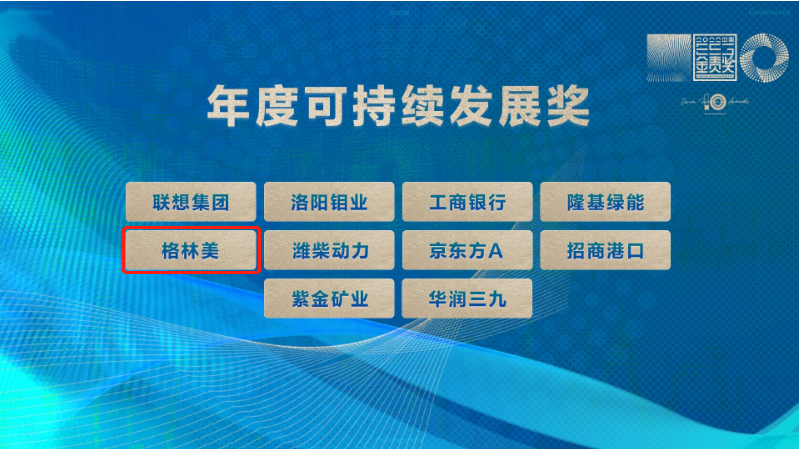 Under the goal of carbon peaking and carbon neutrality, GEM will grasp the strategic opportunity brought by energy restructuring to resources recycling, resolutely advance the renewable energy transformation of parks, realize the clean and low-carbon development of energy, and pursue green, low-carbon and sustainable development. In the future, GEM will proceed with the construction of zero carbon parks represented by WUHAN POWER RECYCLING, take the cloud platform and big data as basis, strengthen carbon emission management, build intelligent low-carbon parks, and explore paths of carbon neutrality such as CCER, thus opening up a new prospect for zero carbon park construction.