At the opening ceremony, Prof. Xu Kaihua, Board Chairman of GEM, reviewed the fruitful results of the joint training program over the past three years, expressing his yearning for the future sci-tech talent cooperation between China and Indonesia.

Chairman Xu Kaihua recollected that the first joint training program opened at CSU on October 14, 2019 and was wrapped up in June 2022. Over the past three years, GEM, CSU and Indonesia's Coordinating Ministry of Maritime Affairs and Investment have united as one to fight the pandemic and overcome hardships, thus accomplishing the training mission as scheduled and gaining high recognition from the Indonesian government. On September 26, Luhut Binsar Pandjaitan, Indonesia's Coordinating Minister for Maritime Affairs and Investment, inaugurated Indonesia's first engineering technology research center for hydrometallurgy and new energy materials specific to GEM (also known as the joint talent training base of GEM and CSU in Indonesia) in on the island of Sulawesi, Morowali, Central Sulawesi. He lauded GEM and CSU for "training masters of metallurgical engineering for Indonesia, which marks a remarkable contribution and a new page in the history of sci-tech cooperation between Indonesia and China!" He expected the program to be a highlight in China-Indonesia cooperation equal to Jakarta-Bandung High-Speed Rail.

The opening of the second joint training program went with the historical trend of China-Indonesia cooperation in promoting new energy and green development. In July 2022, the heads of state of China and Indonesia issued a joint statement, calling for deepening "Belt and Road" cooperation, building the "Global Maritime Fulcrum" and implementing highlight projects under the Global Development Initiative at the bilateral and regional levels. At the opening session of the 20th CPC National Congress on October 16, General Secretary Xi Jinping noted in his report that we should plan development at the level of harmony between humanity and nature, accelerate the planning and construction of a new energy system, and take an active part in global governance to address climate change. The goal of electrification set by the Indonesian government is to increase the proportion of electric vehicles to 20% by 2025. With rich nickel resources accounting for 50% of the world's total, Indonesia has become a strategic hub for world new energy development. However, to turn abundant nickel resources into an advantageous new energy industry, a large number of metallurgical engineering talents are needed.

Prof Guo Xueyi, Vice President of CSU; Prof. Satryo, Senior Advisor to Indonesia's Coordinating Ministry of Maritime Affairs and Investment; Dwi Larso, Chairman of Indonesia Prize Education Donation Foundation; Prof. Cheng Qiongwen, Party Secretary of the School of Metallurgy and Environment, CSU; and Prof. Huang Helai, Dean of the School of International Education, CSU delivered speeches. They spoke highly of the outcomes of the joint training program, expecting relevant sides to further deepen cooperation to promote China-Indonesia cooperation in various fields. They also encouraged the 31 new students to succeed in studies and practice what they learn, so as to become Indonesia's backbone of metallurgical engineering, envoys of friendship in the Belt and Road, as well as ambassadors of cultural exchanges between China and Indonesia.

A Rui warmly welcomed the new students admitted in 2022 on behalf of the students of the first joint training program, sharing his experience of studying and living in GEM and CSU. He described his study and internship practice over the past three years with a saying that goes, "Hardships make great men", hoping the junior fellow students would study hard with gratitude and optimism, and sharpen their professional skills, to live up to the training of GEM and CSU. Muzayadah Nurul Lailatul spoke on behalf of all the new students admitted in 2022, saying he would treasure the opportunity to contribute to the improvement of Indonesia's metallurgical technology, the development of Indonesia's metallurgical industry and the friendly exchanges between China and Indonesia. 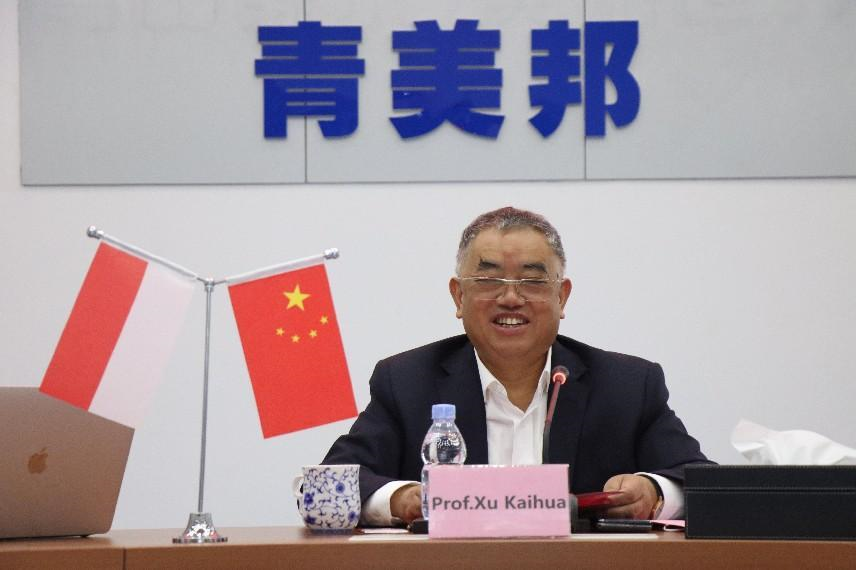 Prof. Xu Kaihua, Board Chairman of GEM, delivers a speech