The epidemic has no borders, and there is true love on earth. At the beginning of February, when the epidemic situation in China was most dangerous, governments and peoples of various countries helped us. When domestic medical prevention and control materials were in shortage , oversea customers and strategic partners assisted GEM’s emergency procurement of these materials, opened transportation channels, and shipped those to us as soon as possible to help the front-line staff who needed. GEM remembered and cherished this friendship.

The infinite grace will be paid for the subtle benefit from our benefactor. With the rapid spread of the epidemic in March around the world, our global partners are now undergoing rigorous examination of the epidemic.

Since of 12th March, while GEM Group was winning the epidemic prevention and control campaign, we mobilized the strengths of the 16 Parks countrywide to initiate the procurement of prevention and control materials, and donated them to our overseas partners. The cumulative donation value exceeds 1.6 million RMB including 25,000 N95 masks, 288,000 disposable medical masks, 4,000 goggles, 1,000 sets of protective clothing, 50,000 pairs of protective gloves, embodying GEM's international role & responsibility. Recently, these materials have been urgently sent to our oversea partners, like Indonesian government, the Pohang municipal government of South Korea, Samsung STM of Korea, Umicore of Belgium, and Europe and the United States. GEM will continue to coordinate the resources of all parties, overcome difficulties such as logistics and transportation, ensure the timely and smooth delivery of these supplies, and help friends from all countries to fight the epidemic and get through hard times.

The heroic spirits always illuminates each other, like an ice pot reflects the cold moon

Seeing true love in adversity! At the special moment of the COVID-19 epidemic in China, the Pohang municipal government of Korea raised 5,000 medical protective masks for Jingmen, Hubei through various channels, helping Jingmen City and GEM to resolve protection difficulties during the "epidemic". At present, the epidemic situation in Pohang City has also highly concerned GEM. Mr. Sun Bing, Mayor of the Jingmen municipal Government, and Professor Xu Kaihua, Chairman of the GEM Group, sent warm condolences to Pohang City together and conveyed the friendship between China and Korea.

Prof. Kaihua Xu, Chairman of GEM Group: The heroic spirits always illuminates each other, like an ice pot reflects the cold moon. The pandemic is ruthless, but China and South Korea can feel each other’s hearts. During the severe epidemic in Hubei, GEM received donated masks with solicitude from the Pohang City. We are extremely grateful. Currently, an outbreak has also occurred in South Korea, and we are very concerned about the safety of the citizens of Pohang. GEM will continue to raise and donate protective materials for Pohang, helping Pohang citizens overcome the epidemic! Pohang wins! Korea must win!

When learning about the lack of protective masks and goggles in Pohang, South Korea, Prof. Kaihua Xu, chairman of GEM Group, immediately issued an order for emergency procurement and donation for Pohang. The parks of the group acted immediately, raced against time, and strictly controlled every time. point.

On March 12, GEM Jingmen contacted large pharmaceutical companies for emergency procurement through various channels, and jointly donated with Jingmen municipal Government. GEM Wuxi, Wuhan and Tianjin jointly dispatched resources. When it was contacted that there was goggles inventory in Danyang, Jiangsu, GEM Wuxi personnel drove to retrieve it as soon as possible; on March 13, all materials were contacted and the source of the goods was determined; on March 15, all materials purchased by GEM were delivered to GEM Wuxi and was distributed by Wuxi Park in a centralized manner; on March 19, all supplies arrived at the Incheon Airport in South Korea. At present, 10,000 N95 masks, 128,000 disposable medical protective masks, and 2,000 goggles have all successfully arrived in Pohang, South Korea.

Upon hearing the news, President Lee DongChe of Korea ECOPRO Co., Ltd. immediately thanked Jingmen City and GEM for their support to Pohang City. President Lee DongChe said that friends who can share the hardships are real friends, and people from all walks of life in Pohang are deeply moved by the noble personality of Chairman Xu Kaihua. They also said that the sincerity of GEM and Jingmen will promote exchanges, cooperation and business development between Jingmen, Hubei and Pohang, South Korea.

On March 25, the mainstream media in South Korea published a news report titled "China Friendly Exchange City Donates Coronavirus Pneumonia Prevention Materials to Pohang City." Lee KangDeok, Mayor of Pohang City, said in the report: Pohang City shares the difficulties caused by the COVID-19, and gives them infinite care and sincere friendship. Thanks for that. Pohang City will never forget this kindness. " Pic 1 The government of Pohang, South Korea expresses its sincere gratitude to Jingmen City and GEM Pic 2 GEM donates 600,000 RMB worth of prevention and control materials to the government of Pohang, Korea

The world is fine, Indonesia is peace!

The GEM Indonesia Nickel Resource Project was successfully invested in Central Sulawesi, Indonesia, which is the result of the full promotion of the Coordinating Ministry for Maritime Affairs and Investment of Indonesia and Minister Luhut. In early February, China's outbreak was urgent. Minister Luhut of the Coordinating Misistry for Maritime Affairs and Investment of Indonesia sent a sympathy phone call to the chairman of GEM Prof. Xu Kaihua, expressing the Indonesian government's friendly concern for the GEM’s prevention and control of the COVID-19 and good wishes to GEM

China and Indonesia are in a strip of water. After learning that Indonesia was also deeply affected by the epidemic, GEM actively extended a helping hand and worked hand in hand with Indonesia to urgently raise and purchase 5,000 N95 masks, 160,000 disposable medical protective masks, 2000 goggles, and 1,000 sets of protective clothing, 50,000 pairs of protective gloves and other protective materials worth a total of about 800,000 RMB. All the materials carried the best wishes from GEM and they were shipped to Shanghai on March 24 and handed over to the Indonesian Consulate General in Shanghai to be shipped back to Indonesia to help Indonesia solve the urgent needs of the anti-epidemic period.

In the afternoon of March 25th, the Indonesian Consulate General in Shanghai held a ceremony for Chinese companies to donate COVID-19 emergency prevention and control materials to Indonesia. The consul general Deny W. Kurnia host the ceremony and also video link with Ambassador Djauhari Oratmangun, the Indonesian government sincerely thanks the participating companies such as GEM for their kindness! 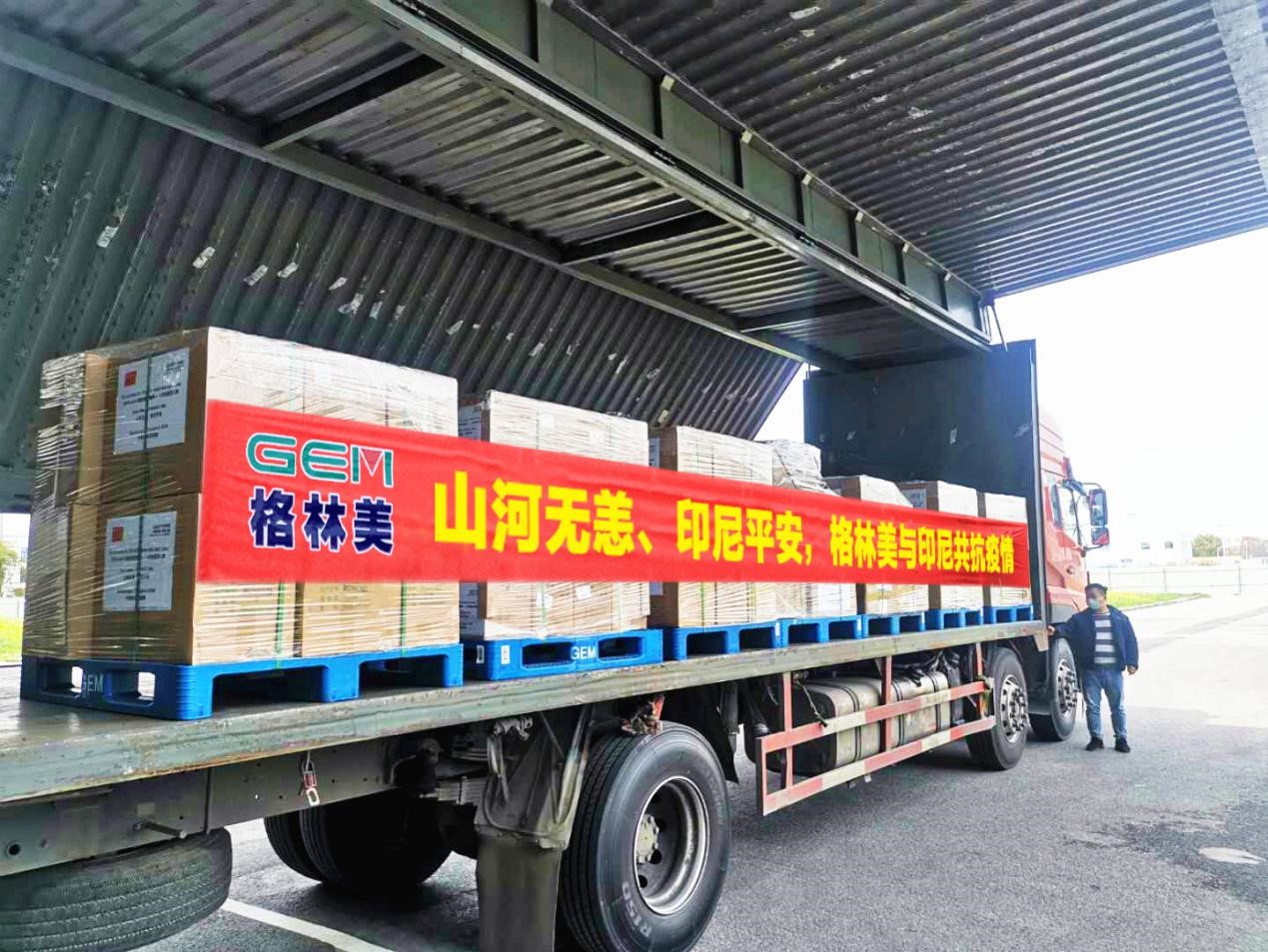 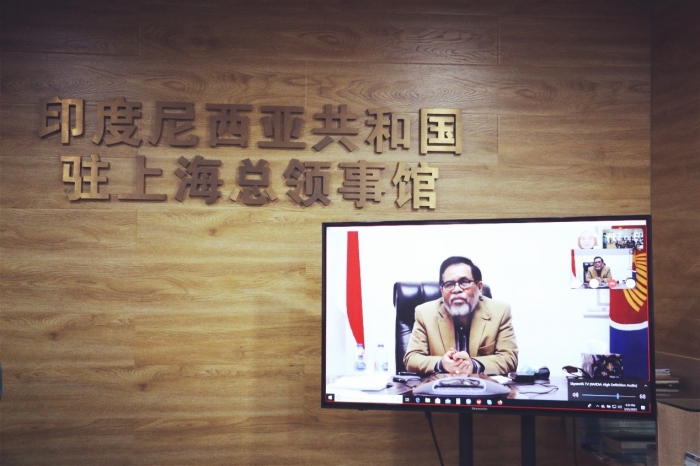 Pic 4 H.E Djauhari Oratmangun, Indonesian Ambassador to China, thanked the companies such as GEM for their donations 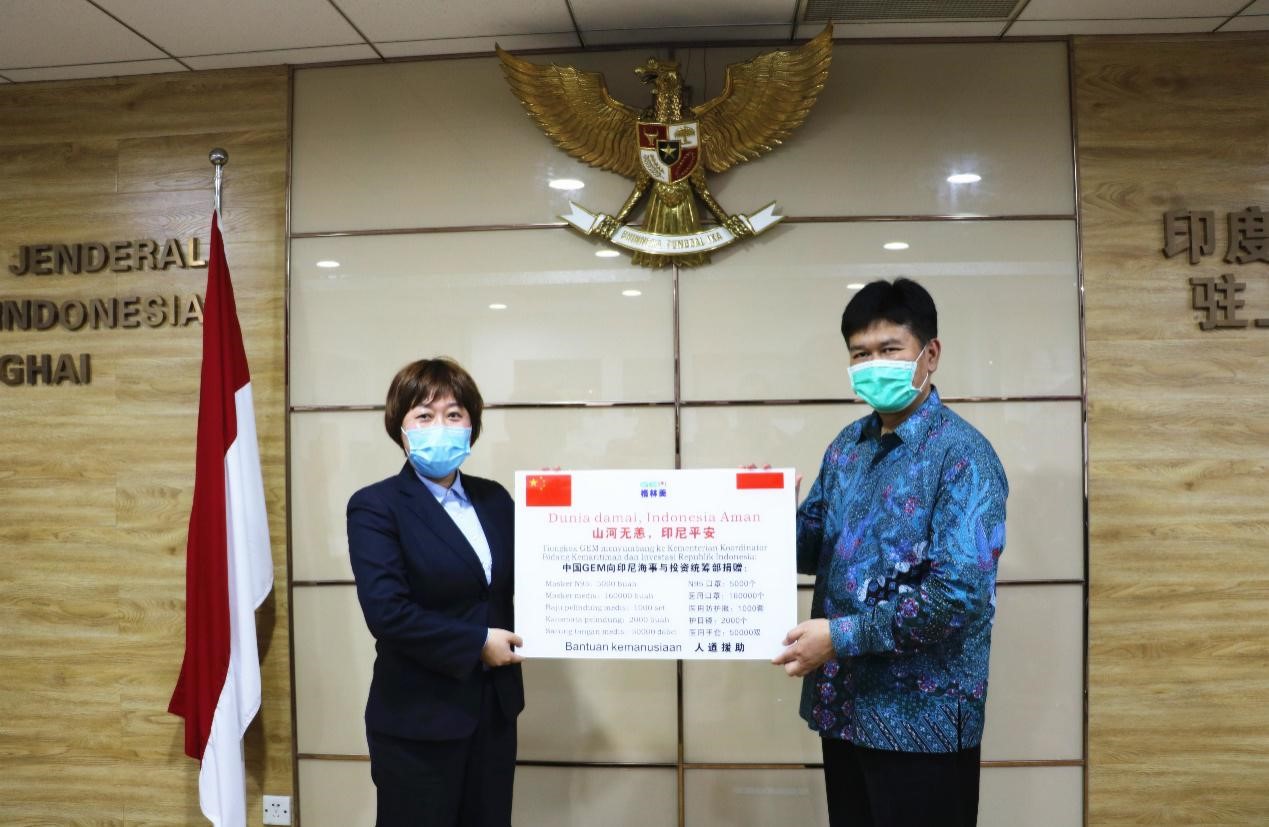 After the outbreak, Chairman of the GEM Group, Prof.Xu Kaihua, expressed his sincere concern and care for Indonesian students in the WeChat exchange group of the Indonesian Metallurgical Engineering Master Class jointly developed by GEM, Central South University, and the Indonesian government. Prof. Xu Kaihua express: Protect the safety and health of yourself and your family, and reunite when spring blooms.

In addition, on March 20, GEM donated 5,000 N95 masks to Samsung STM in South Korea and Umicore in Belgium, and all of them were delivered. They were sent to the "spring breeze" for the good friends who were "tested by the epidemic". GEM is continuing to raise many urgently needed medical supplies, and is expected to donate urgently needed protective supplies to other overseas partners this week. 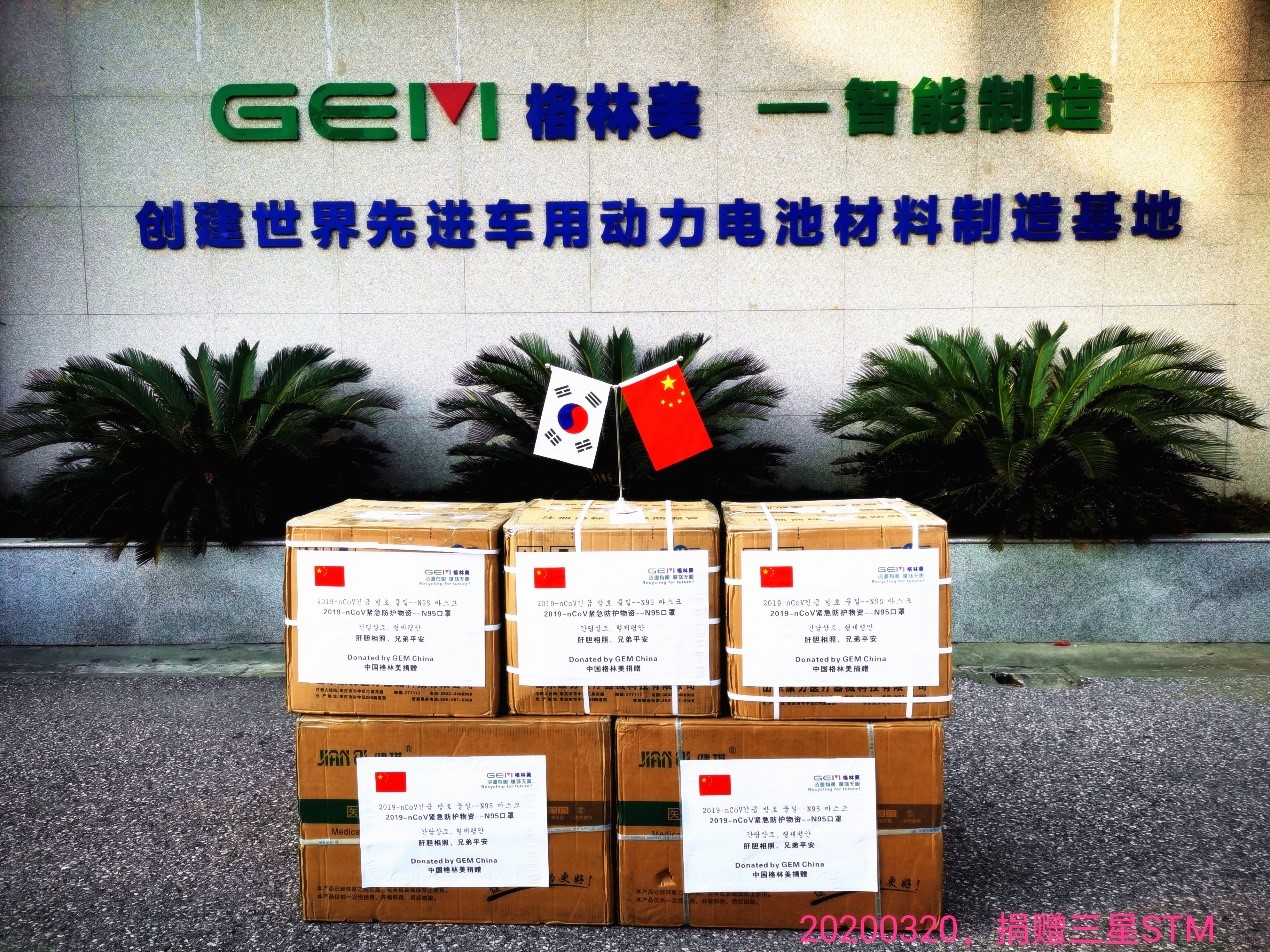 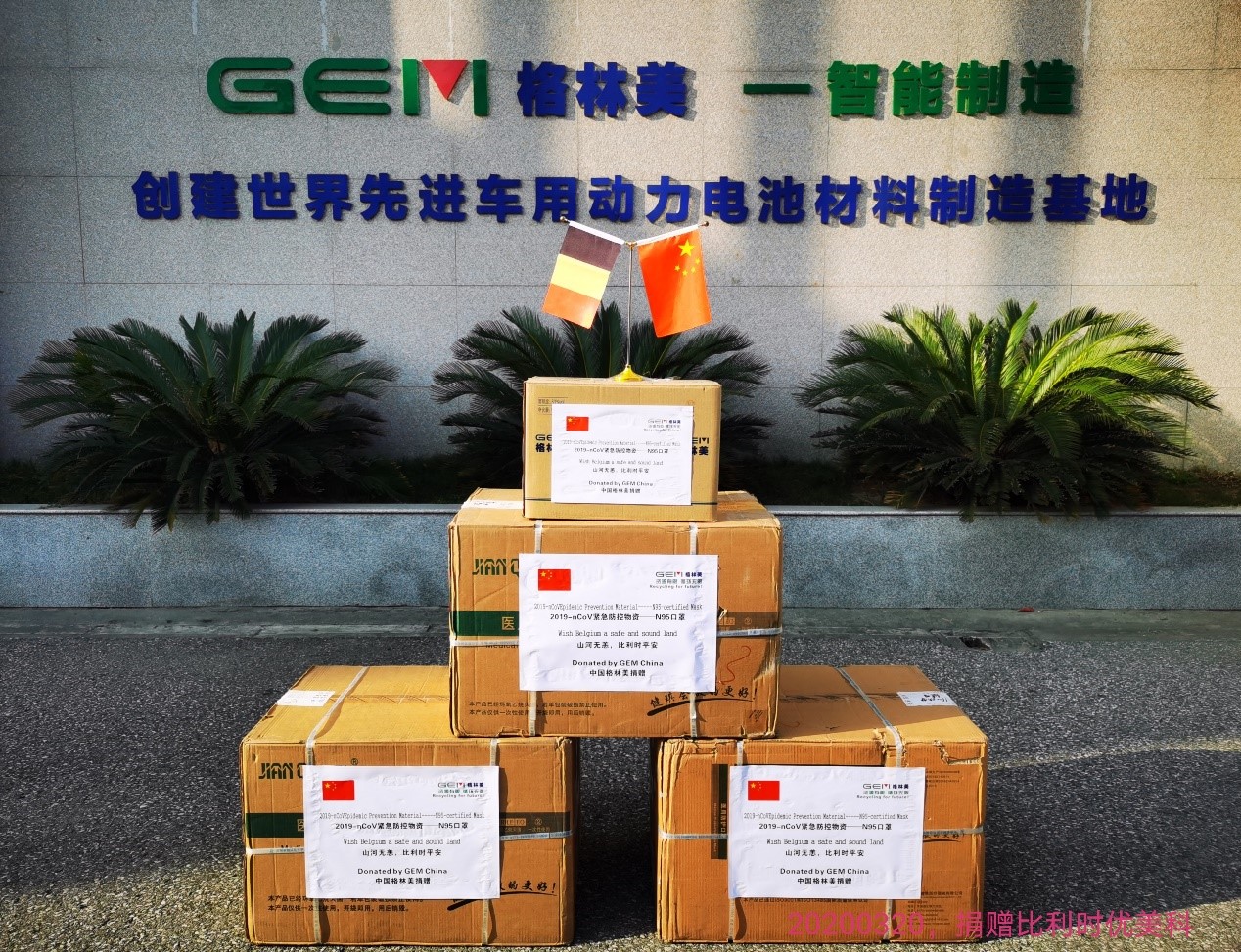 We will never forget the helping hand extended by overseas friends at the time of the worst epidemic in China and when GEM needed help. Today, the COVID-19 epidemic has become a global challenge, and the joint fight against the "epidemic" is becoming an international consensus. GEM is willing to work with global partners to help each other, overcome the current difficulties, contribute to against the epidemic, work together to meet the challenges of the global pandemic, and build a community of shared future for humanity.