On June 14 to 15, 2019, the Founding Conference of the Special Committee on Urban Resource Recycling of China Circular Economy Association (hereinafter referred to as the "Special Committee") was solemnly held in GEM (Jingmen) Recycling Industrial Park. Hu Xiaoguo, Vice Mayor of Jingmen Government, Zhou Junjie, Director of Jingmen High-tech·Duodao District and other government leaders, Zhu Xingxiang, President of the China Association of Circular Economy, Li Jinhui, Professor of the Environmental College of Tsinghua University, Executive Director of the Basel Convention Regional Centre for Asia and the Pacific/Stockholm Convention Regional Centre for Asia and the Pacific of the United Nations Environment Programme, Wang Xuejun, Professor of the Urban and Environmental Sciences of Peking University and other experts, scholars, enterprises representatives and related urban resource recycling representatives, a total of more than 80 people attended the conference.

On the morning of June 15, the founding conference of the Special Committee was held in the International Conference Hall of GEM (Jingmen) Park. Zhao Kai, Vice President and Secretary General of China Circular Economy Association, hosted the meeting. First, Hu Xiaoguo, Vice Mayor of Jingmen Municipal People's Government, delivered the opening speech for the conference. Vice Mayor Hu Xiaoguo expressed strong support for the establishment of the special committee. It was an important measure to actively respond to the Party Central Committee's proposal to vigorously develop circular economy, to improve the efficiency of resource recycling and to accelerate the construction of ecological civilization. It was a trend of the times and a homeopathic move.

The Founding Conference of the Special Committee read out the "Approval for the Establishment of the Specialized Committee on Urban Resource Recycling of China Circular Economy Association", Consideration of the Committee's "Working Rules", the list of personnel of the organizational structure and the list of expert committees, the deputy directors and the secretary general of the election committee. The scrutineer announced the result of the vote and read out the resolutions of the General Assembly.The General Assembly voted to elect Bi Lin, Deputy General Manager of China Renewable Resources Development Co., ltd. and other seven members as deputy chairman, and Guo Miaomiao, as Secretary General of the Committee.

Professor Xu Kaihua, Chairman of GEM Group, delivered a speech on being elected as Chairman of the Commission. He thanked the government, associations and enterprises for their support and trust. Although there are many challenges at present, as long as we continue to innovate, adhere to the road of high-quality development, uphold the concept of win-win cooperation, and work hard, we will certainly carry out the recycling to the end!

Zhu Xingxiang, President of China Recycling Economy Association, delivered a speech on the establishment of the special committee, expressing that it will give full play to the role of the professional committee in promoting the development of resources recycling industry. We should adhere to the core concept of “recycling waste into treasure”, enhance the technical level of the industry through cooperative innovation, and promote the sustainable, high-quality and healthy development of urban resource recycling industry.

Subsequently, a licensing ceremony was held for the "Basel Convention Regional Centre for Asia and the Pacific-GEM Company Limited Joint Platform for Technology Transfer and Training" The establishment of a technology transfer base in GEM, on one hand, is to promote the Basel Convention through the base, so that the public can have a better understanding of the international and domestic environmental situation; On the other hand, we should fully utilize the technological advantages of the base, carry out horizontal cooperation, and develop common key technologies to the industry, promote collaborative innovation and transformation of scientific and technological achievements, and provide technical and talent support for the high-quality development of circular economy.

After the awarding ceremony is completed, the conference entered into the theme report section.

Professor Li Jinhui, Director of the Expert Committee of the Special Committee, Professor of the Environmental College of Tsinghua University, and Executive Director of the Asia-Pacific Regional Center of the Basel Convention of the United Nations Environment Programme/Stockholm Convention, Asia Pacific Regional Center, explained the construction of "Waste-free city". "Waste-free city" is guided by the new development concept of innovation, coordination, green, development and sharing. In the future, the pilot project of “Waste-free city” will be vigorously promoted, and the source reduction, resource utilization and harmless treatment will be vigorously promoted.

At the end of the meeting, Secretary-General Zhao Kai said: The establishment of the special committee has opened a new chapter in the field of urban resource recycling, marking China's circular economy entered a stage of high-speed, orderly and shared development. It is the new high quality development of China's advantageous environmental protection enterprises, and jointly promotes the green development of China's urban resource recycling industry. 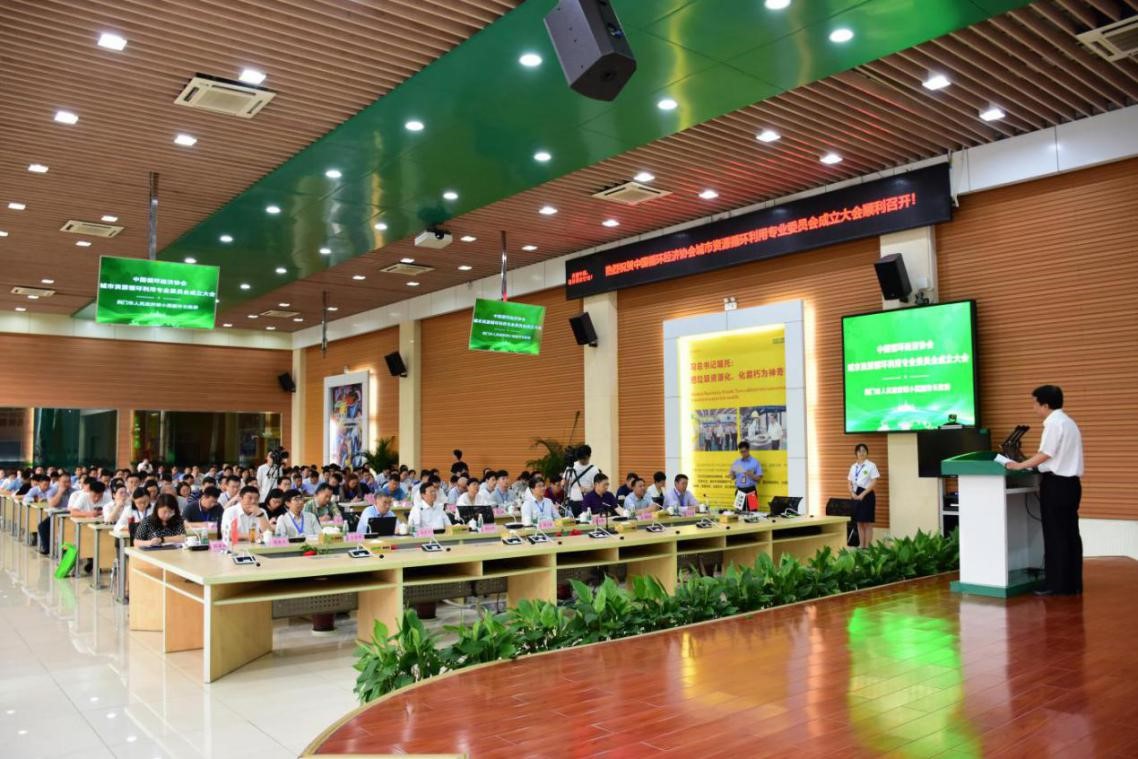 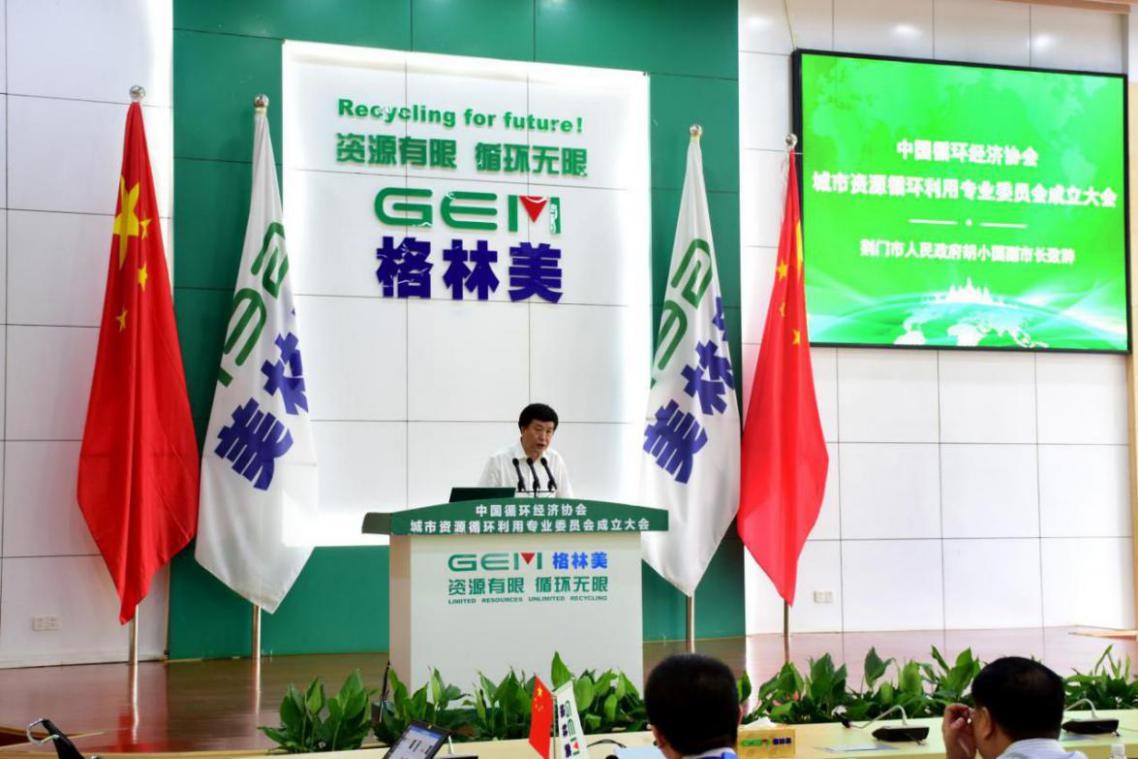 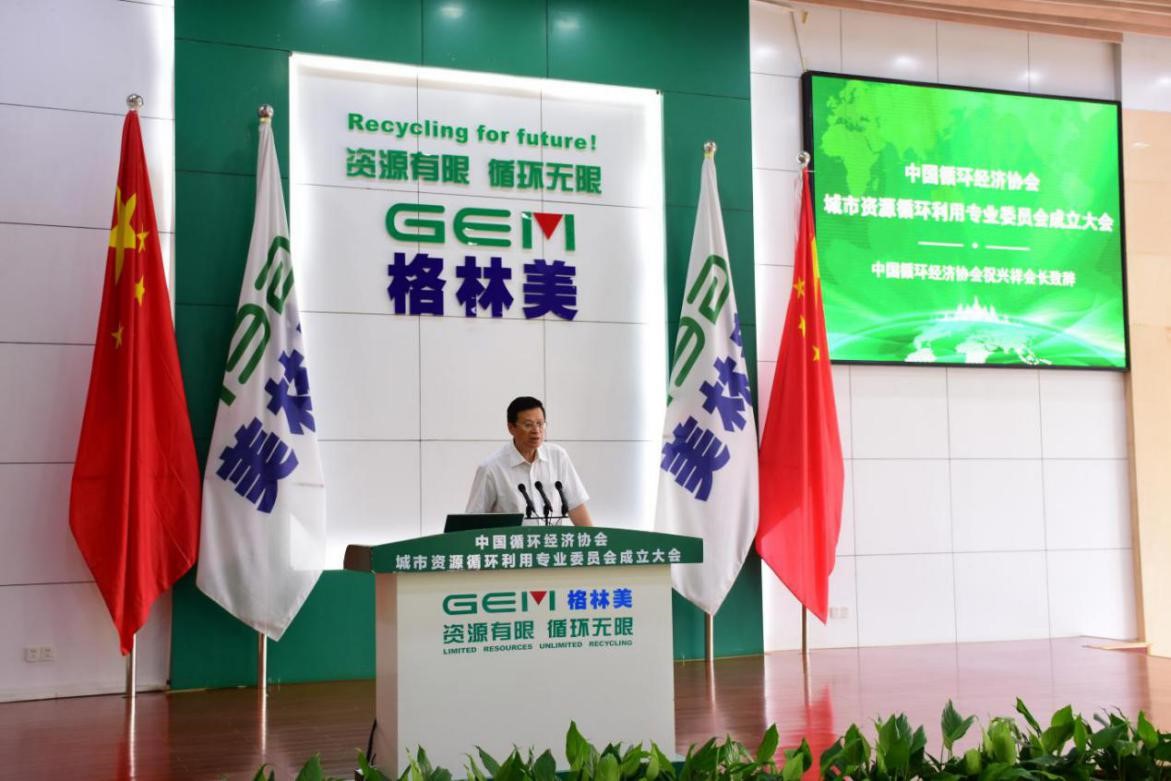 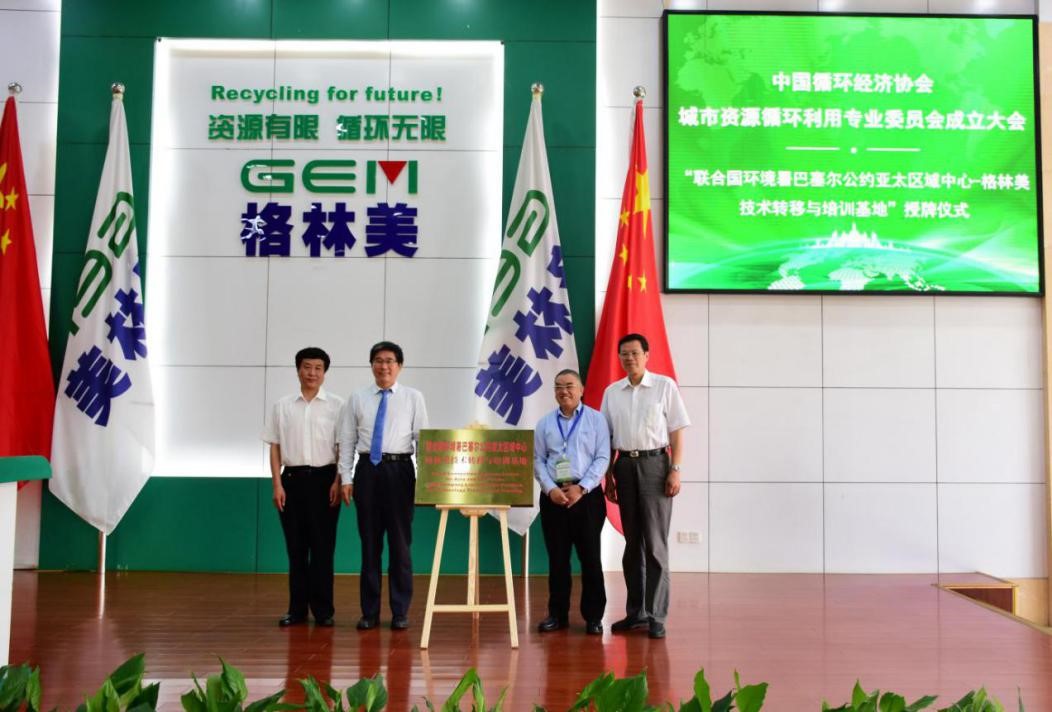 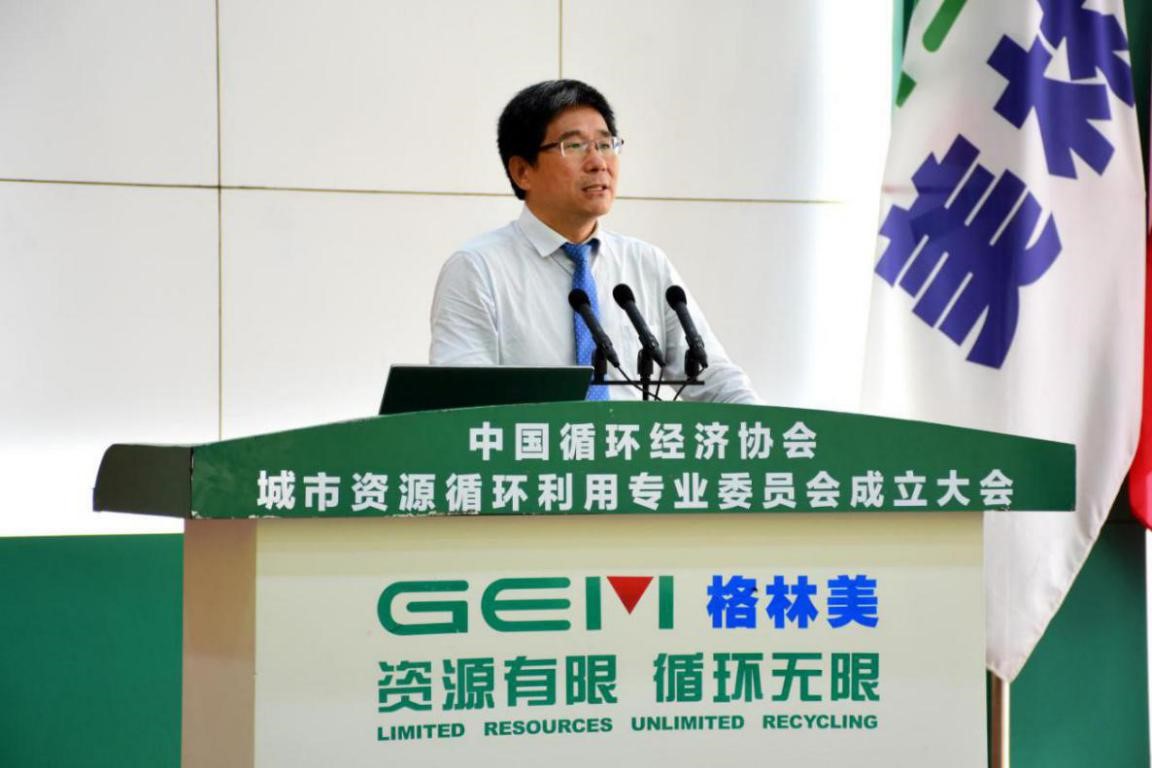 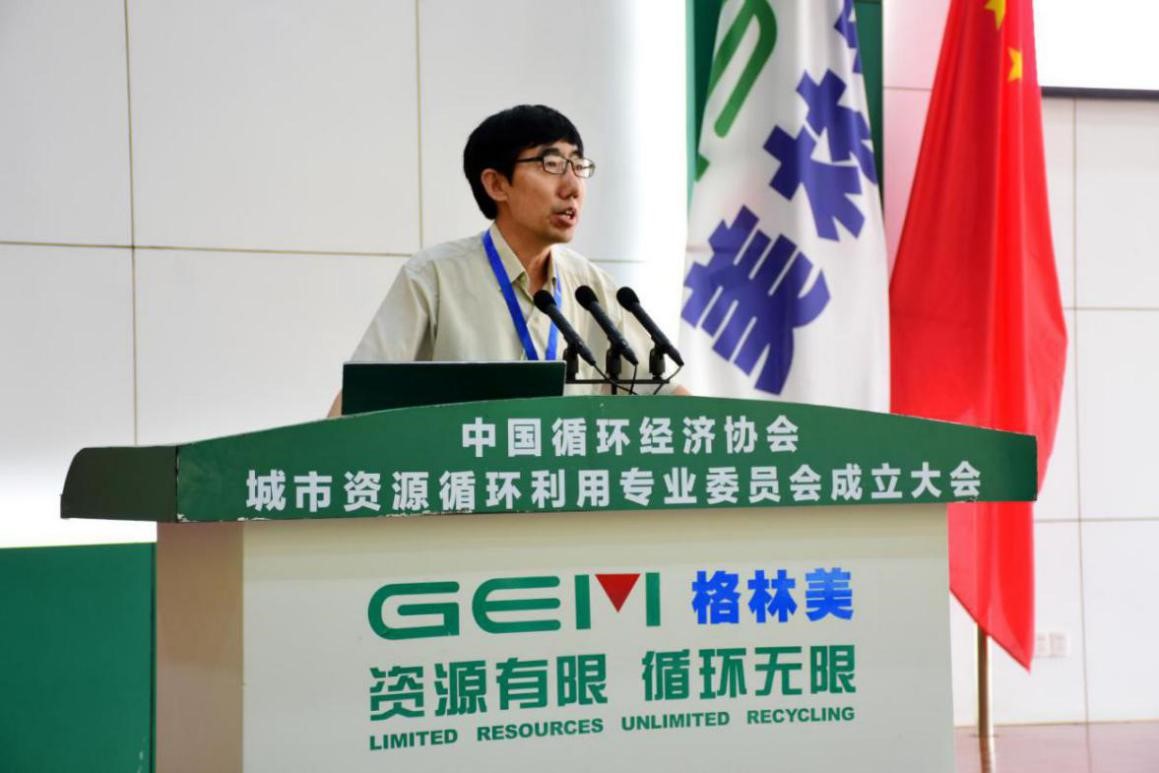 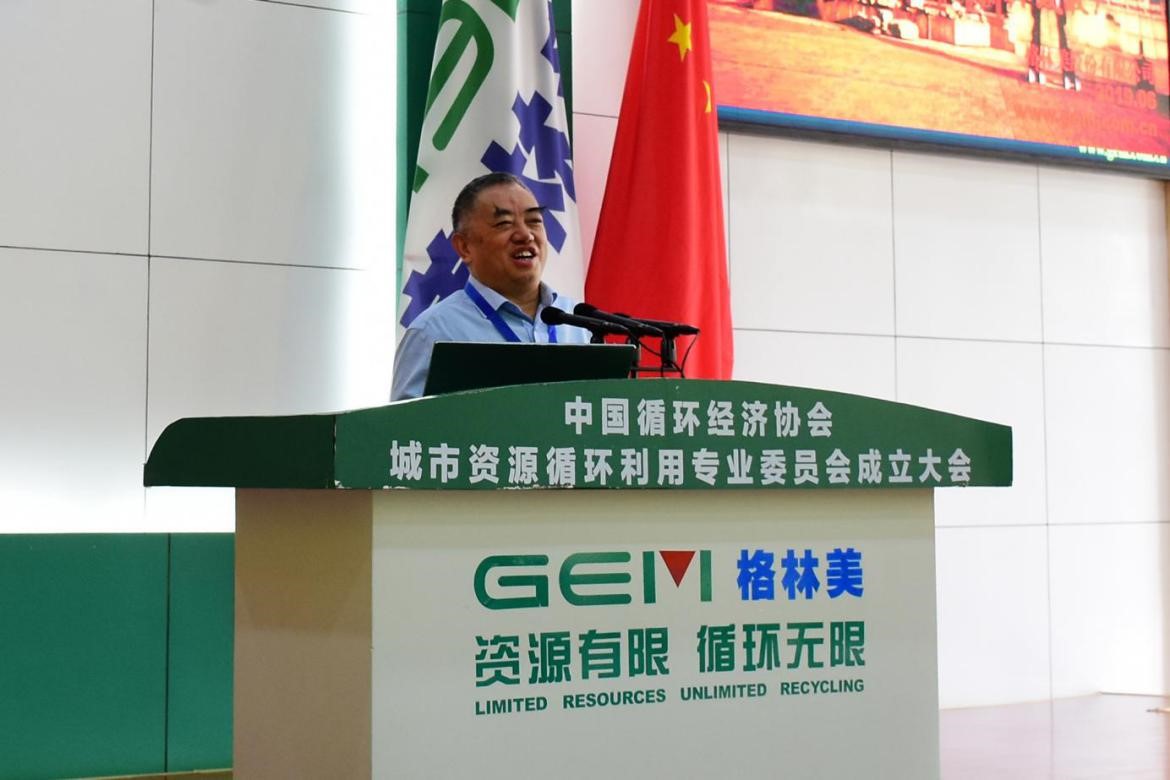 Pic 7. Keynote Speech for the Conference by Chairman Xu Kaihua 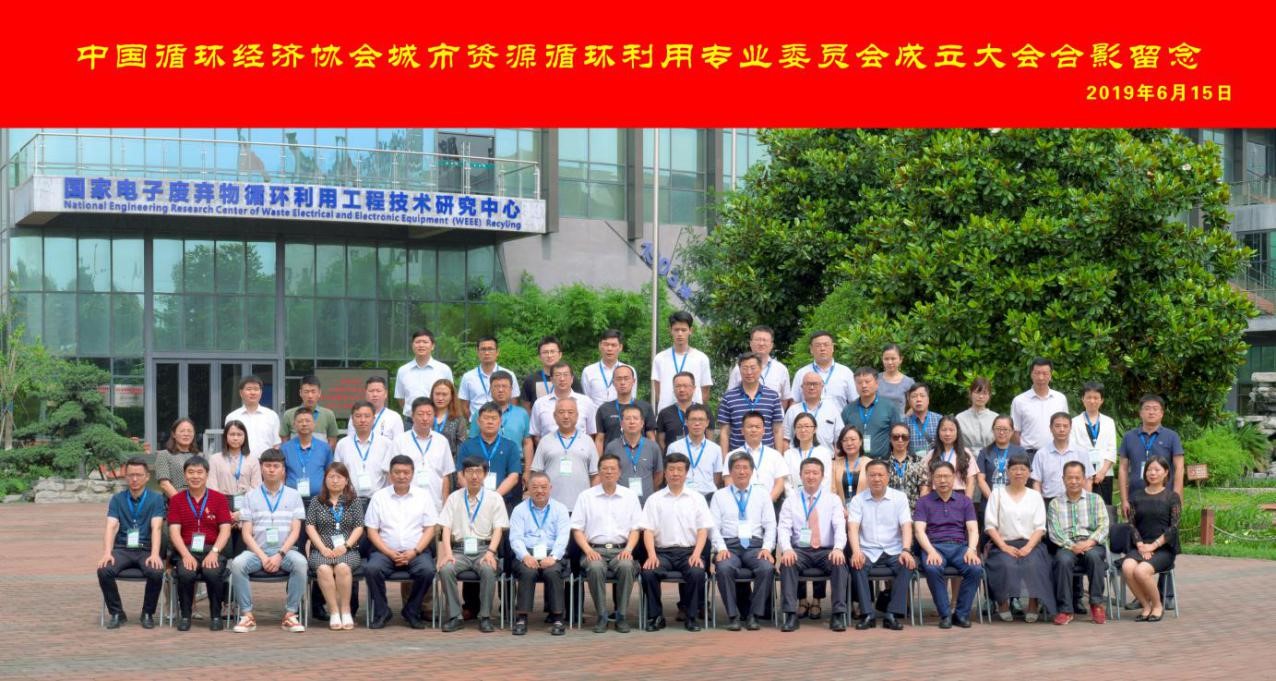 Pic 8. A Group Photo of the Delegation Attending the Meeting